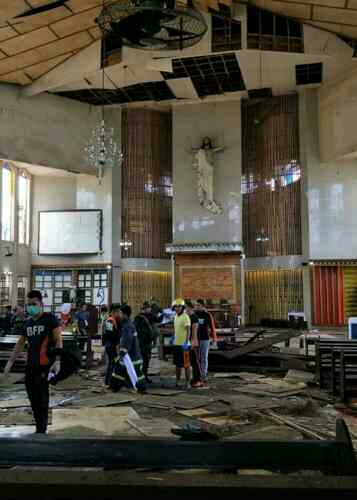 Local officials report that 20 people have been killed and dozens more were injured in two bombings that took place in at a Roman Catholic cathedral in southern Philippines. The BBC reports the first blast took place during a church service on Jolo island, where Islamic militants are active. The second device was detonated in a parking lot as soldiers responded to the first blast.

The attack comes days after the people voted for and passed a referendum for autonomy, which aims to bring an end to the decades of violence between separatists and the national army. However, this was not passed in Sulu province where Jolo is located.

ISIS has claimed responsibility for the attack.

Please pray for comfort for the bereaved families.

Pray that no further violence occurs and that the Lord will disable the evil plans of those who are responsible for this incident.

Pray for alertness, wisdom and strength for the Philippine government forces responding to this tragedy.

*Representative names and photos are sometimes used to protect identity.