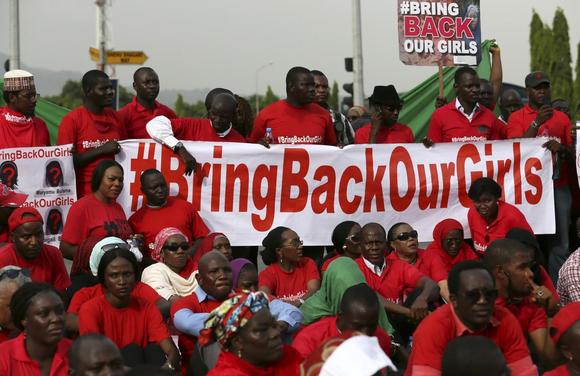 The Abuja wing of the ”Bring Back Our Girls” protest group prepare to march to the presidential villa to deliver a protest letter to Nigeria’s President Goodluck Jonathan in Abuja, calling for the release of the Nigerian schoolgirls in Chibok who were kidnapped by Islamist militant group Boko Haram, May 22, 2014.

(Reuters) – Four more of the girls kidnapped by Boko Haram last month have escaped than previously thought, Nigeria’s Borno state said on Wednesday, but 219 others were still missing and assumed held by the Islamist militants.

The girls were taking exams at a secondary school in the remote northeastern village of Chibok on April 14 when the Islamist gunmen surrounded it, loaded 276 of them onto trucks and carted them off, according to official figures.

Education commissioner Musa Inuwa told Reuters by telephone the four had been reunited with their parents since then, but he declined to give further details of their escape or say when it happened.

A senior Borno state official said it was not clear when they escaped, and it may even have been several weeks ago. The parents had not contacted authorities when the girls returned.

“It was a little after the initial escapes but we doubt it was a recent escape,” he said.

The girls’ abduction shone an international spotlight on the militants, whose violent struggle for an Islamic state in northern Nigeria has killed thousands and turned them into the biggest threat to security in Africa’s top oil-producing state.

From being a religious movement opposed to Western culture – Boko Haram means “Western education is a sin” in the northern Hausa language – the sect has emerged as a well-armed insurrection with a growing thirst for blood.

Chief of Defence Staff Air Marshal Alex Badeh said on Tuesday the military knew where the abducted girls were but ruled out a rescue by force for fear of endangering them.

Most officials think any raid to rescue them would run a high risk that the girls would be killed by their captors. Boko Haram has repeatedly showed ruthlessness in targeting civilians.

The military has been bruised by criticism at home and abroad of its failure to protect the girls and its slow response to the hostage crisis. Badeh was quoted in the state news agency as saying the military was doing all it could to secure the girls’ release.

“No matter the criticisms, the Nigerian Armed Forces will continue to do what it had sworn to do,” he said. “You are aware that we have international partners working with us to release our girls and our girls will be released.”

Thirty-one security personnel were killed in an attack by heavily armed Boko Haram militants in the town of Buni Yadi on Monday.